Update: Dirigo Events has responded to The Sole Supplier’s ranking, saying it was skewed and did not include participant feedback. Click here to read the company’s note to the media.

One of the nation’s biggest marathons – the Standard Chartered Kuala Lumpur Marathon – has been ranked dead last in a global ranking of major marathons.

According to the ranking by The Sole Supplier, a UK-based trainer review and news site, the Standard Chartered Kuala Lumpur Marathon scored just 3.69 over 10 – the lowest score out of 81 marathons worldwide.

This was largely due to air pollution, a hot climate, slow average finish times and a lack of medical aid along the course, it said.

Other marathons at the bottom of the list include IDBI Federal Life Insurance New Delhi Marathon (second-worst) and StanChart’s Singapore marathon (third-worst). 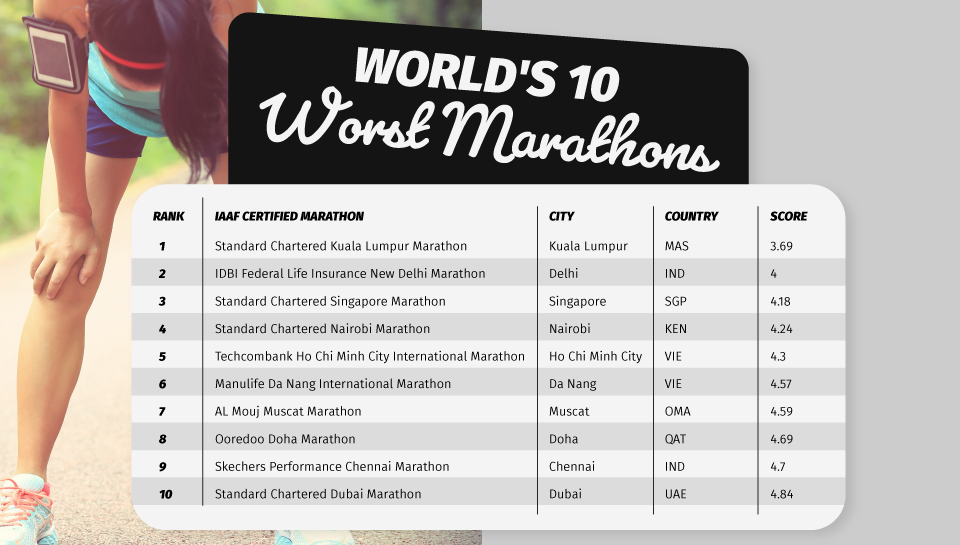 It warned that the Delhi and Singapore marathons should “also be approached with caution”.

Singapore’s iteration of the Standard Chartered Marathon was most recently criticised for choosing to hold the race on one of the busiest nights of the nation’s year-end holiday season.

The Singapore marathon, which was held at night for the first time last Saturday, caused hours of massive traffic gridlock in the city centre. Needless to say, Singapore’s road users were not pleased.